On Sunday 9th February, during adoration time at the parish, we used a prayer, sent by Begona for the feast of St.Josephine Bakhita, for all the victims of human trafficking and to ask for the conversion of traffickers.  On that … Lire la suite →

This year the Interchurch Group against Human trafficking prepared the prayer vigil based on the diary of St. Josefina Bakhita, with testimonies of victims of this explotation and biblical texts, to show that what happened to Bakhita still happens today … Lire la suite →

In October 2019 the Union of Major superiors of Burkina/Niger (USMB/N) invited the Talitha Kum Burkina team to share with them on human trafficking and on the Talitha Kum network. I prepared the presentation that was given by Sr. Yvonne Clémence Bambara of Our Lady of Charity of the Good Shepherd, with whom I collaborate as member of the Talitha Kum Bobo committee. Our sharing was an eye opener for many major superiors who expressed their desire to support the efforts of the existing committee in order to create greater awareness on human trafficking in our country and region. Read more.

A march to create awareness about child trafficking

The girls of Salaga College organized a peaceful march, with signs, to educate parents and society about the dangers of child trafficking. The march is a follow-up to an awareness program by Sabine and her staff on human trafficking which has taken place in several schools. We are pleased to see that awareness is making its way among young people. Read more.

The road travelled by Solwodi Germany during 2019

In April Solwodi organized a world congress in Mainz against the sexual exploitation of women and girls.  The first success : a parliamentary group emerged in Berlin to ban the purchase of sexual acts.
Our clients who have been victims of human trafficking and who have ended up in prostitution have experienced great cruelty.  Violence against women occurs in many places and settings, even in the Church where even Sisters are victims of sexual violence. Read more.

Prostitution tramples on the dignity of women

In an interview by SOLWODI of Prof. Dr. Elke Mack, of the University of Esfurt, she defends the nordic model – the prohibition of the purchase of sexual acts, itroduced in 1999 in Sweden, which has been successfully legalized in several countries. As a Christian, she sees it as the only convincing way to protect women against sexual exploitation. Read more.

“The protection of minors is an integral part of the Gospel message hence there is need to create a safe environment for them, giving priority to their interests”, said the Archbishop of Blantayre, Malawi, Msg. Thomas Luke Msusa, addressing the African Bishops during the SECAM meeting, (Symposium of Episcopal Conferences of Africa and Madagascar). Yet, child trafficking, child labour and the issue of child soldiers continue to persist in many parts of the world, despite laws against it, according to Fides News Agency. Read more.

Pope Francis: Free women from the slavery of prostitution

Pope Francis contributes the preface to a new book on human trafficking, entitled « Women crucified”, by Fr Aldo Buonaiuto, a priest of the Pope John XXIII Community. The shame of human trafficking as told from the street ».
In the preface, Pope Francis recalls one of his Mercy Friday visits to a house run by the Pope John XXIII Community for victims of human trafficking. “I did not think I would find such humiliated, afflicted and suffering women there”, writes the Pope. “Truly, women crucified”.
Pope Francis describes listening to “the moving and very human stories of these unfortunate women, some of them with their child in their arms”. Afterwards, he says he felt the need to “ask forgiveness for the real tortures they had to endure because of their clients, many of whom call themselves Christian”. Read more.

March of street children of Tamale

The International Day of Street Children was celebrated in Tamale for the first time, thanks to the initiative of the Centre for Development and Policy Advocacy (CEDEPA) supported by ADAMFO Ghana and with the collaboration of some religious institutions. To … Lire la suite →

Migration from domestic work from Africa to West Asia

GAATW, The Global Alliance Against Traffic in Women has started a project, together with the International Domestic Workers Federation, to document the experiences of women from six African countries who migrate for domestic work to West Asia. The field work  involved several groups of respondents: potential and returnee migrant domestic workers, their families, recruitment agencies and brokers (formal and informal), trade unions and NGOs supporting migrant domestic workers, and government officials. In March the project team met to discuss the progress of the field research, reflect on the research process, and build the national researchers’ capacity in data analysis and report-writing. Reade more.

Sr. Bibiana Emenaha of the Daughters of Charity of St. Vincent de Paul speaks to students in February at a rural school in Edo on the dangers of trafficking. (Courtesy of the Committee for the Support of Dignity of Women)

Sr. Bibiana Emenaha of Daughters of Charity of St. Vincent de Paul is the current coordinator at the Committee for the Support of Dignity of Women (COSUDOW), where she leads the advocacy and campaigns in fighting human trafficking in Nigeria. Founded in 1999 by the Nigerian Conference of Women Religious, the committee collaborates with other anti-trafficking organizations. Six local nongovernmental organizations have joined COSUDOW in the fight against trafficking, too.
Since 2017, the United Nations’ International Organization for Migration (IOM) has flown home more than 10,000 Nigerians who could not get to Europe after being in countries like Libya, Mali and Niger. Read more.

The Migration and Refugees Section of the Dicastery for the Service for Integral Human Development has published the document “Pastoral Orientations on Human Trafficking”, with the aim of understanding, recognizing, preventing, and eradicating the plague of the trafficking of persons, protecting the victims, and promoting the recovery of survivors. Read and dowload the document.

On the occasion of the feast of St Josephine Bakhita, 8th February 2019, the Lavigerie community of  Karlsruhe, Germany organized an evening of awareness raising about human trafficking, in collaboration with « Justice Project », a local NGO.  Weeks before, we had … Lire la suite →

On the 8th of February the Church remembers  St. Bakhita, patroness of kidnapped persons and victims of trafficking. We Missionary Sisters of Our Lady of Africa in Nouakchott (Mauritania) have taken this occasion to raise awareness about human trafficking. Because  … Lire la suite →

In my commitment against human trafficking, I see the importance of beginning by raising peoples’  awareness.  Sessions to make this reality known are the means used by the team of Talitha Kum Burkina. In November Sr Yvonne (Good Shepherd Sister) … Lire la suite →

MIGRATION WITHOUT TRAFFICKING : say yes to Freedom and no to slavery

The theme for the International Day of Prayer and Awareness against Trafficking in persons 2018 highlights the situation of human trafficking among people on the move: migrants, refugees and internal displaced people.
We are invited to enkindle a light against human trafficking for these brothers and sisters of ours.  Let us enkindle our hearts and lives, so as to be a welcoming light of hope and encounter.  Find the guidelines for the preparation of the prayer vigil.     Read more.

In my commitment against human trafficking, I see the importance of beginning by raising peoples’  awareness.  Sessions to make this reality known are the means used by the team of Talitha Kum Burkina. In November Sr Yvonne (Good Shepherd Sister) … Lire la suite →

In 2016, the estimates of modern slavery in Sub-Saharan Africa accounted for approximately 13.6 percent of the world’s total enslaved population. In Ghana, there are an estimated 103,300 people enslaved y, of which 85 percent are in forced labour (farming and fishing, retail sales, manual labour and factory work), and 15 percent are in forced marriage. In South Africa, the commercial sex industry, manual labour industries (construction, manufacturing and factory work), and drug trafficking are the sectors with greater slaves… Read more.

Recognize the symptoms of Human trafficking

Are you or someone you know being trafficked? Is human trafficking happening in your community? Recognizing potential red flags and knowing the indicators of human trafficking is a key step in identifying more victims and helping them find the assistance they need. Read more…

Human trafficking is a crime that shames us all. Every year, thousands of men, women and children fall
into the hands of traffickers, in their own countries and abroad… Read more… 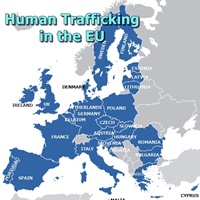 Info and graphics indicating the reality of human trafficking in EU , the form it takes in the member states, the percentage by gender and the number of victims, with graphics. Read more…

Slavery and what we buy, today’s fight for tomorrow’s freedom.

A fact sheet from anti-slavery about the products we buy today that may have been produced through the use of slave labour. Read more…

Trafficking in human beings, the slavery of our times

A fact sheet of the EU about the 5 myths about trafficking in human beings and the EU response. Read more.

Fact sheet of the antislavery organization on the conditions for a person to be in slavery; different forms of modern slavery; facts about slavery; how to end slavery? and what is being done to end slavery. Read more.